The sounds of riding up the switchback filled road called the Sani Pass that takes people from KwaZulu-Natal Province in South Africa into Lesotho are hilarious and interesting. It is especially funny when you are riding in the very back of an ancient Land Rover on a tiny bench without a seatbelt. Oh, and the transmission on the vehicle is failing and at one point the driver’s door won’t latch and his solution is to just hold it closed with his arm all the while shifting the manual transmission, telling us about the pass, and navigating the perilous curves. What have I gotten myself into?

“Get out of the way donkeys” our driver yells at the donkeys blocking the road on our drive up.
“Holy crap look at this road” exclaims the American boys riding in the back of the Land Rover along with my friend and I up the pass.
“Ow, my head” I laughingly cry out as I crash into the ceiling as our guide maneuvers the vehicle over the rocky, sandy, pot-hole filled road.

Map of our Sani Pass Route

The funny thing about this trip is that Sani pass is a very short road that takes you from KwaZulu-Natal in South Africa and into Leostho. In theory, it should only take about an hour to drive it, but because of the incredible scenery, scenic stops, and winding roads it ends up taking much longer. 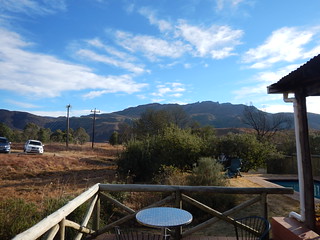 Getting to go on this journey up the pass took some planning and luckily some days off from work. In June South Africa had a 4 day weekend because of Youth Day, so we had enough time to make the journey south and partake in the crazy ride up the pass. Thus, my friend and I headed to a backpackers at the southern part of the pass (Sani Pass Lodge and Backpackers) and booked a tour up the road into Lesotho. As we were booking from a backpackers, the tour was definitely budget as observed by our mode of transport up the pass. Two old looking Land Rovers pulled up and we were informed that we need to cram 10 people into each one. Of course seat belts are non-existent in this ancient vehicle from a time when seat belts were a suggestion and not law. Maybe as we pile all those people in to the vehicle we will wedge ourselves in for safety?! My friend and I decide the best seats (read craziest) were the 2 benches in the very back of the 4×4, which were just metal benches with thin pillows on them. Two other young American boys pile in with us and we’re set for our journey. There wasn’t really anywhere to hold on and more than a few times I resorted to just bracing myself against the ceiling. Seat belts be damned, this was going to be a crazy ride. Later on the pass we see all the nice and new 4x4s taking people up. I bet those people all had seat belts and half the fun. 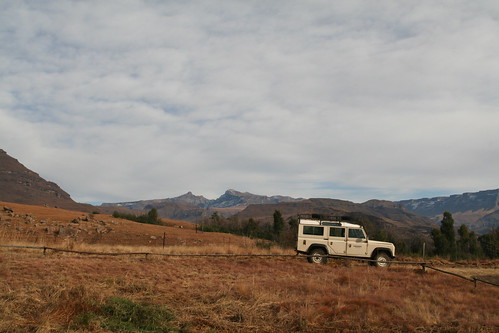 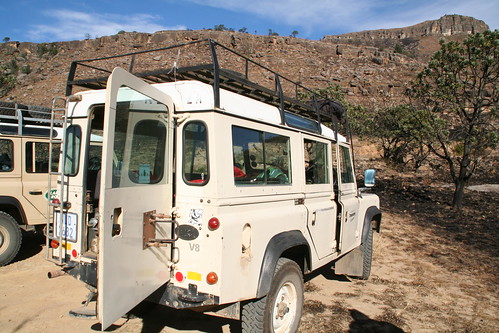 The Land Rover parked at a scenic view point 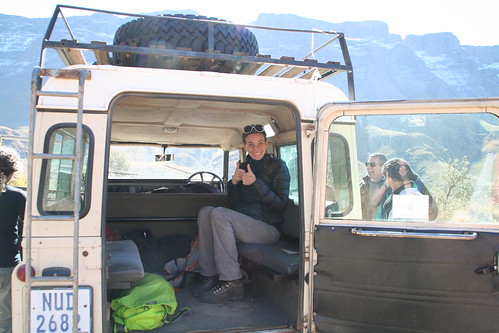 My seat for the Sani Pass drive. Thumbs Up I am not bleeding from the head.

The trip is amazing all the way up as the drivers stop many times to let you out and take in the incredible views. On this particular day the views were splendid with sunshine and blue sky. We could see for forever. 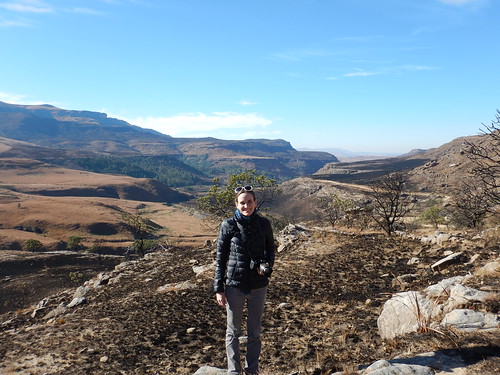 Taking photos at a scenic view point on Sani Pass 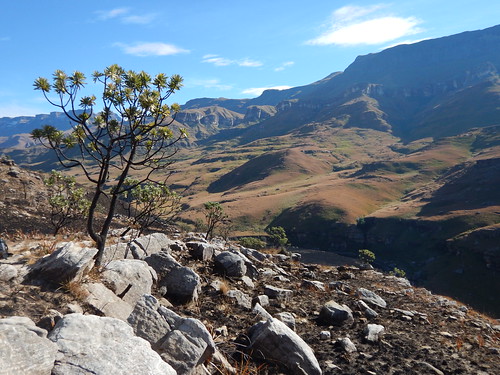 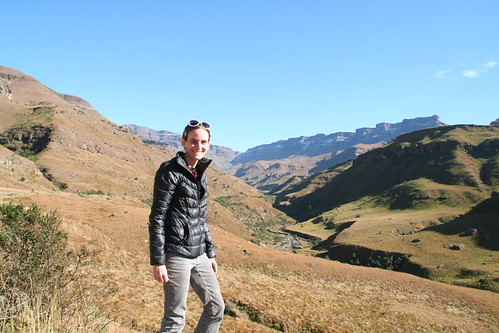 View of where we will be going, up the Sani Pass

Honestly, half the fun of the trip was driving up the pass on roads that could best be described as rough. The roads are full of rocks and potholes that is besides the boulders and river crossing that occur throughout the ride. Our driver sped along the route at quite a speed, which meant that those of us in the back were sometimes sent flying around. We kept apologizing to each other as we landed on top of each other after a huge bump. Our driver also drove in a zig zag pattern presumably to avoid the bigger potholes in the road, but at times it was hard to tell. 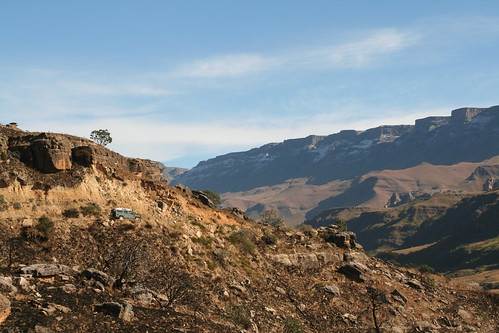 Another Land Rover headed up the pass 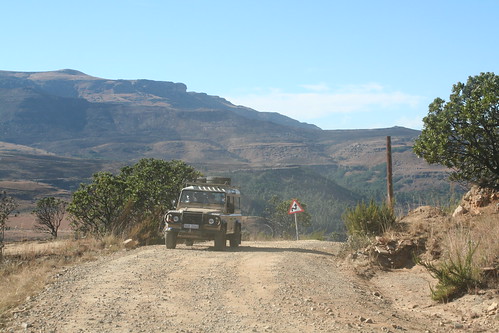 The second Land Rover filled with 10 people navigating the pass 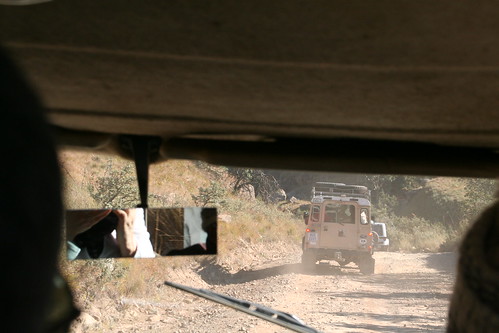 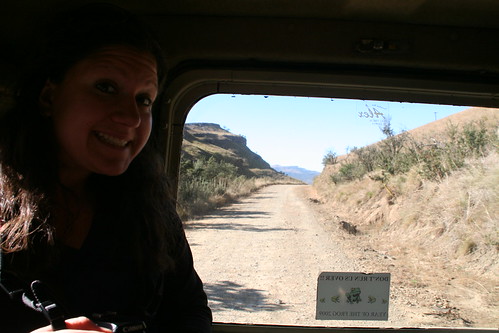 My view from the back of the Land Rover

Then there are the road blocks along the way. I mentioned the donkeys and there were definitely multiple times were donkeys blocked our path up the pass. 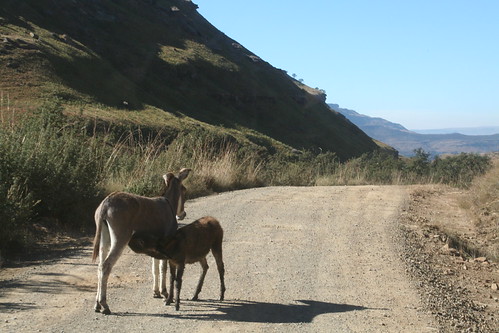 Baby donkey feeding in the road 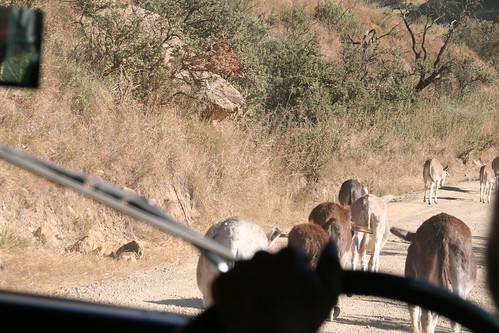 Donkey roadblock on the way up

Eventually, we got to the border control points. First up, we leave South Africa and head into the no man’s land. The border posts are pretty crowded as tourists are headed up the pass on this glorious day. It wasn’t ridiculous though and we got through the check points relatively quickly. 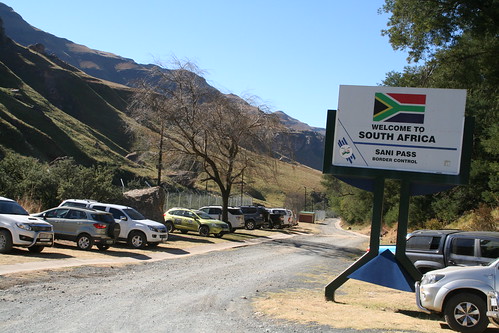 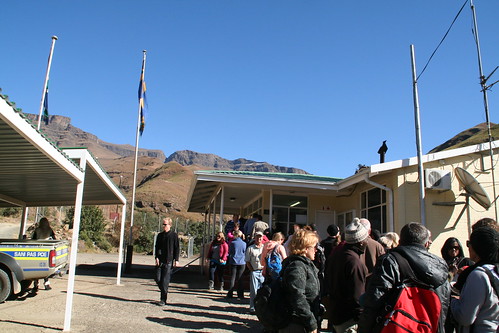 Once we depart the South Africa border post then real fun begins. It feels like the border post demarcates the point where the road is mild to the where the road becomes insanely full of switchbacks. The road remains a rocky, bumpy ride, but now throw in some crazy curves. Also, there are no guardrails so it is understandable why this pass is considered so dangerous. Oh and because it is winter then the snow and ice are present and make for an even more crazy ride. Our drivers were excellent, though, so we weren’t worried about safety from that perspective. I was more worried about cracking my head on the ceiling. 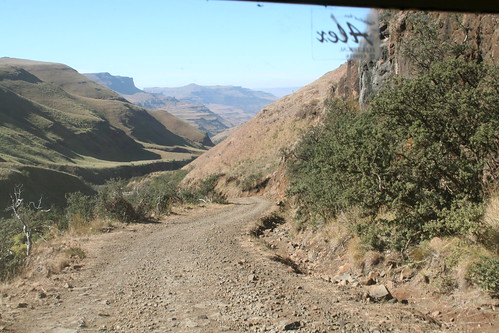 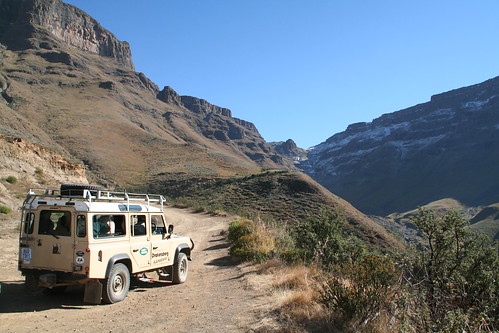 Heading up the Sani Pass in our Land Rovers 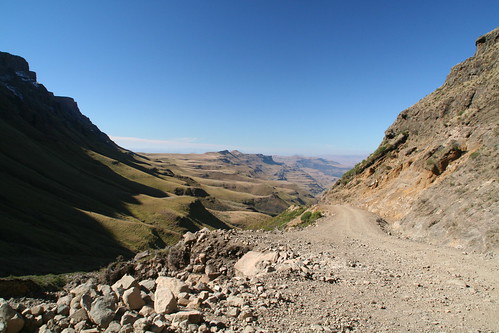 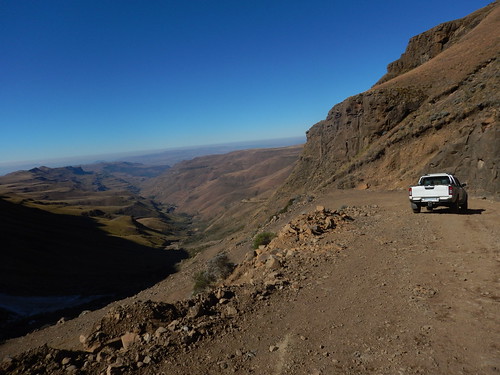 Switchbacks abound along the drive 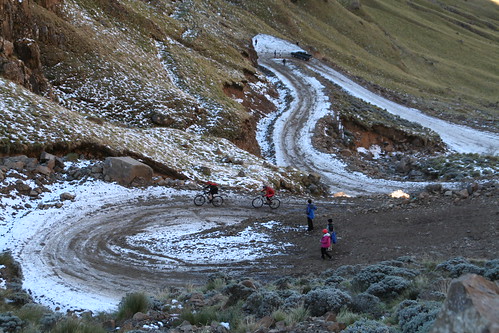 All kinds of traffic from cars to bikes to people happens on the pass. This is the icy section of the pass that remains in the shadow all day and doesn’t melt. 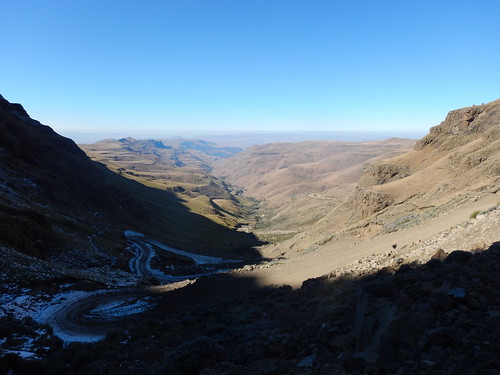 Again the scenic overlooks are incredible and we couldn’t get enough of the views. The Sani Pass is truly a magical and unique place. 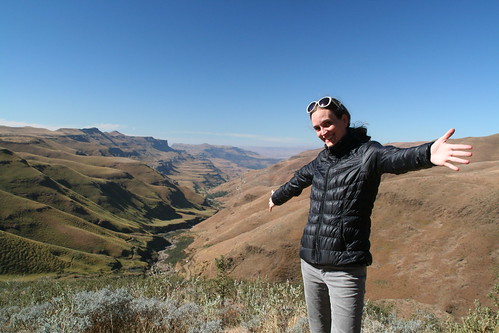 I am loving these Sani Pass views 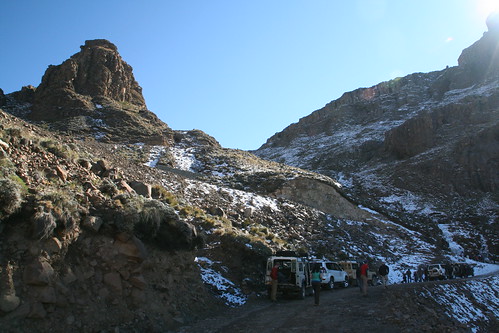 After the 9 crazy kilometers of snow, ice, curves, and bumps, we arrive at the top of Sani Pass and the Lesotho Border Post. Now we will be stamped into the Kingdom of Lesotho aka the Mountain Kingdom, which is a unique country for a variety of reasons including that entire country lies at an elevation of >1000m and it is the only country in the world to be completely surrounded by another country aka South Africa. More on Lesotho later. 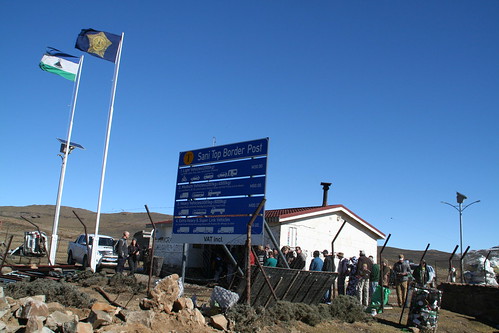 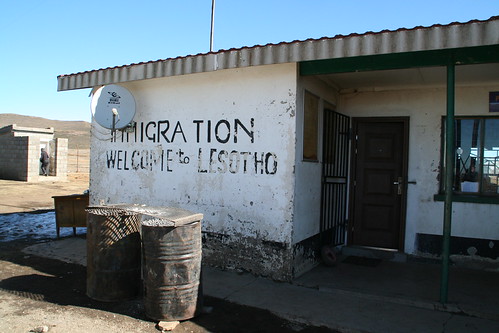 Welcome to Lesotho at the rustic immigration 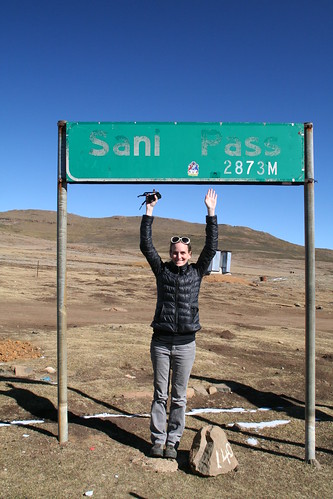 As previously stated, I am so glad I got to do this journey now when the road was unpaved and the journey more rugged. At the top of Sani Pass at the border to Lesotho, the road is already being paved and signage indicates that paving projects are on-going. While I understand paving the road will make it easier for tourists to travel into Lesotho bringing their ample tourist dollars and bolstering the Lesotho economy, I can’t help but be sad that this unique drive will be gone. Thankfully, I got to experience it in its rugged state and still bring my tourist money into the Lesotho economy. 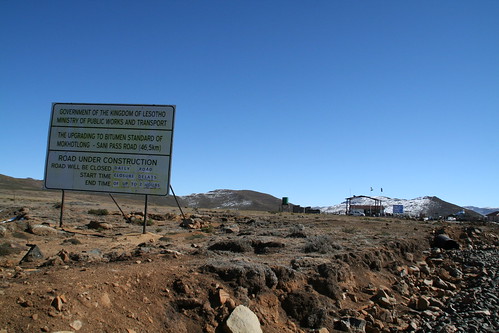 Signage of the Kingdom of Lesotho public works projects, i.e. the road paving 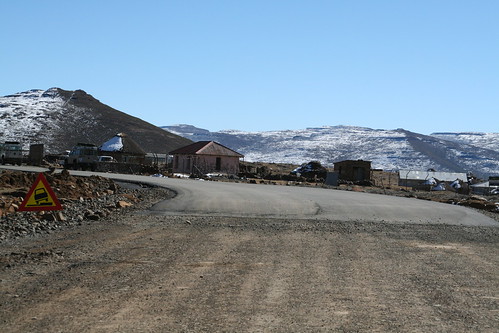 To see all photos from my drive up the Sani Pass, check them out here.