On a sunny Sunday, our group decided to tackle the most famous element of Cape Town, Table Mountain. As our group was filled with fit mountaineers, it was decided that doing one of the hikes was the best way up. As it turned out it was not only the best, but the most economical way to get to the top of Table Mountain because it is completely free unless you count all the sweat and water consumed as collateral. I was happy to hike up the mountain as I previously went to the top via the cablecar and missed out on this must do activity in CT. 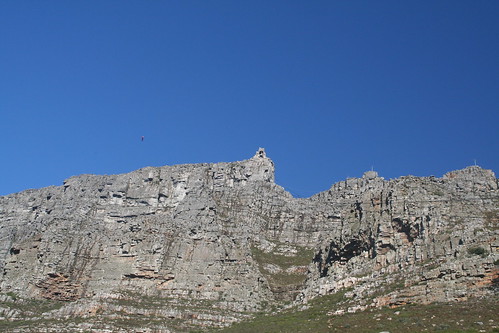 Where we are headed, to the top

There are numerous ways up the mountain, but a very popular is the Platteklip Gorge route, which traverses the side of Table Mountain facing Table Bay. This path also has the distinction of being the most direct route up the mountain. 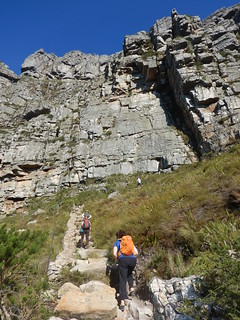 Up up up Platteklip Gorge

The fine print about this route is that it is the most direct because it goes straight up. SANparks actually describes the Platteklip Gorge route as

Up – relentlessly up! That’s the only way to describe the path in Platteklip Gorge. It’s the most direct route to the top of the mountain and the most popular. However, it is not a route to be trifled with; the going can be tough.

We hadn’t read the SANparks website prior to the hike, so we naively saw the hike as a mere hike. However, it was a challenge, but not too much for anyone in our group. Plus it was completely worth it as we were rewarded with incredible views over the Bay as well as of Lion’s Head and Signal Hill. Do heed the warning of its toughness, though, because the hike sorta feels like a perpetual stairmaster as you climb rock stairs up the side of the mountain. It is a workout and my legs were a bit sore the next day, but the trek up the mountain was worth it for the fun, exercise, and incredible views on a perfectly sunny day in CT.

Don’t take my word for it. Check out my photos from the hike up and see what lies in store. 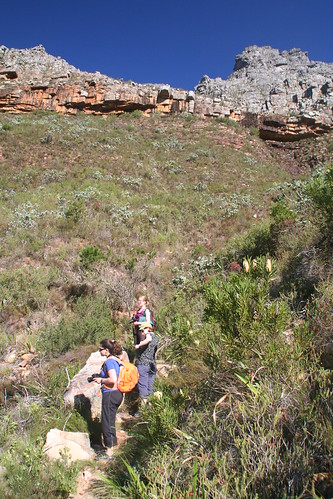 Taking in the views on the way up 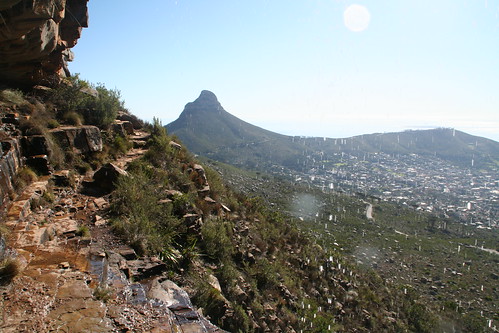 View of Signal Hill and Lion’s Head from the trail

Panorama of the views from the hike 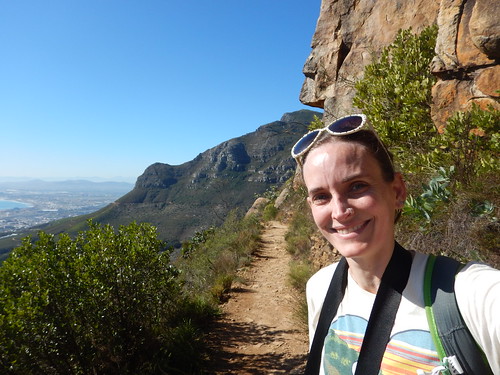 Happiness is hiking up Table Mountain 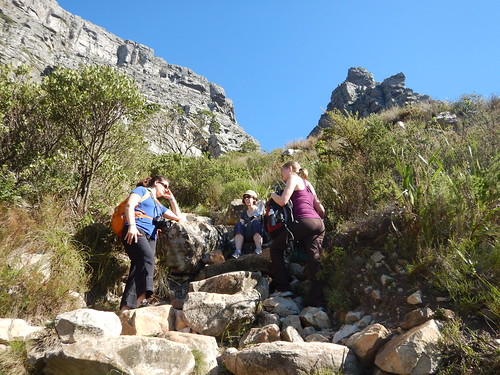 Taking a much needed rest break for rehydration 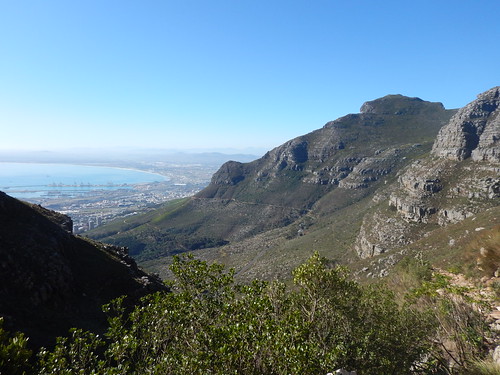 View of Table Bay from a point closer to the top than where we started, but not at the top 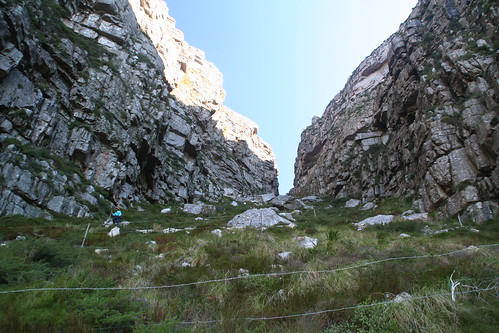 Yep, there are many switchbacks full of rock stairs en route to the top through the gorge 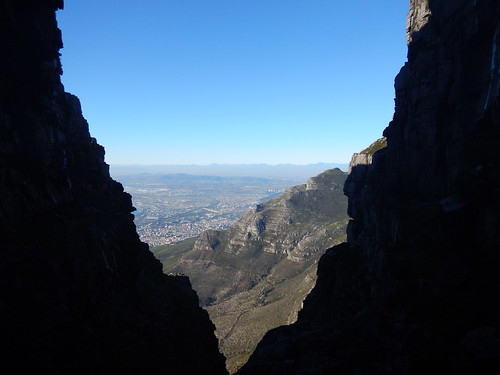 A view from inside the gorge 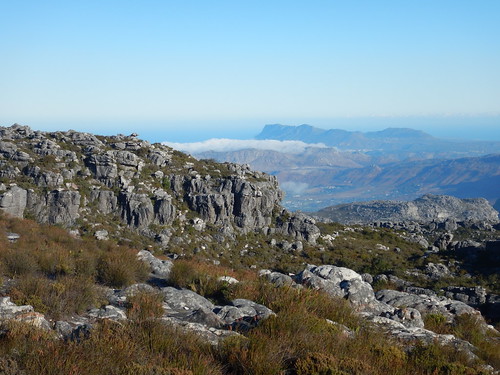 Incredible views await at the top 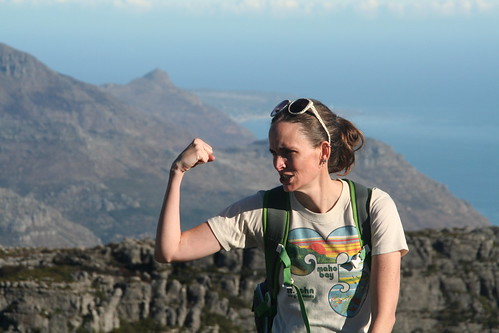 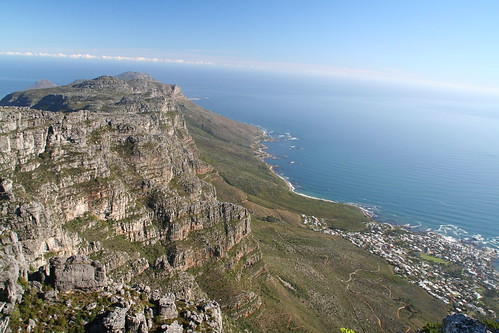 View from the top

As mentioned, we didn’t do a lot of investigation before our hike up Table Mountain. We knew where the trail began and ended, but we really had no idea how long the hike would take. Combine this with the fact that we left in the midday, so we didn’t have a lot of hours to trek both up and down the mountain. We made it to the top in the mid-afternoon and after a quick snack and look over the edge at the views we needed to depart. We figured we had plenty of time to get back down the mountain because it should be easier to get down than up. This was true, in theory. 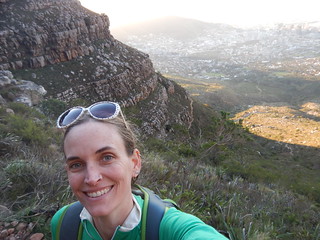 Hiking down the mountain, quickly

However, climbing down the rock steps was still tough and we took a different route to the bottom, one that took us to the cablecar station at the bottom, which was where our Uber driver would pick us up. This detour added time to our trail hike. At one point we saw a sign that indicated it was still 45 minutes to the station and the sun was already mostly down. Oops. We definitely picked up the pace practically trotting to the bottom of the mountain. The one bonus of this misstep in time management was that the hike down at this time of day afforded incredible views as the sun was setting turning the sky pink and orange behind the other famous mountains (Lion’s head and Signal Hill) as well as over Table Bay. In the end, we made it down to the bottom almost exactly as it was turning pitch black (no we didn’t all have headlamps or flashlights with us), so disaster was averted AND we got to watch an incredible sunset from Table Mountain. 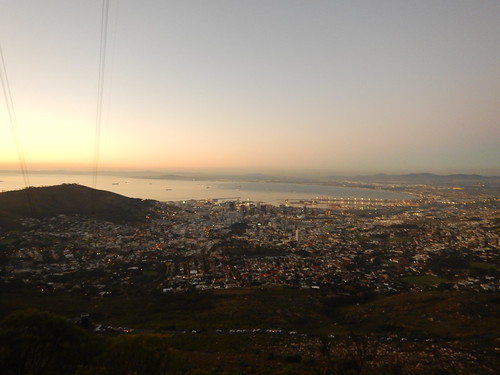 The sun begins to set over Table Bay. We’re still not worried. 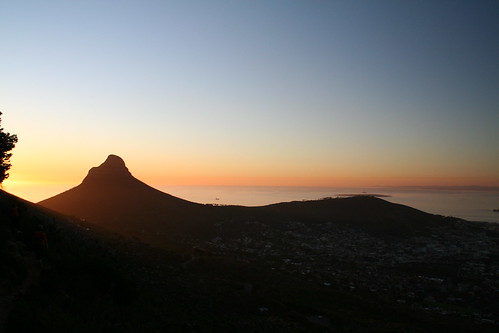 Incredible skies during the sunset hike down Table Mountain. Concern is starting to set in, but the views are so incredible we are still stopping to take photos. 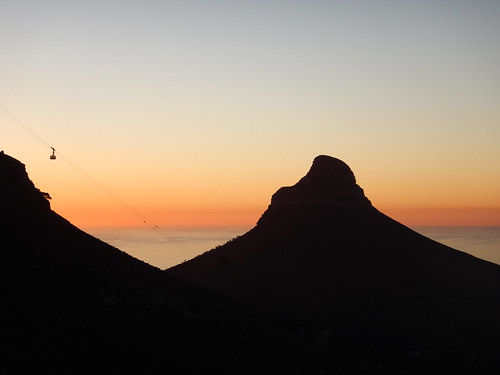 Even more incredible views are captured on film before we trot down the mountain to avoid total darkness. 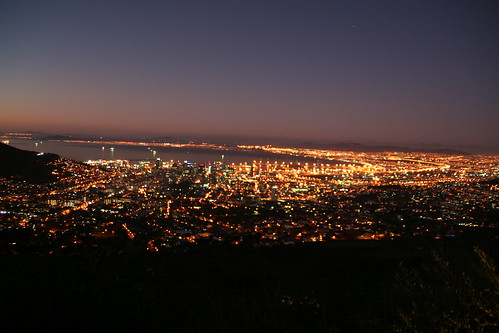 We arrive to the lower cable station as it is almost too dark to see the path. View over Cape Town shrouded in darkness as we wait for the Uber driver to show up. Phew! We did it.

To see all photos from our hike up and down Table Mountain, check them out here.

One response to “Hiking Table Mountain in Cape Town”