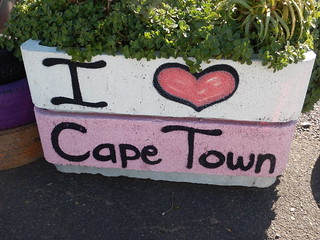 I really do love it there

I talked about my love of Cape Town previously (here), but it is just such a great city for me. It has the sea. It has mountains. It has lovely bars, restaurants, and neighborhoods. Plus it is compact and easy/safe to get around either by foot or public transport. Cape Town, I love you.

Thus, I was excited to return to Cape Town with my former co-workers for another long weekend of fun in this incredible city. Plus I was going to be able to do some of the tourist attractions that I previously missed like Robben Island (read about that trip here) and hiking Table Mountain (read about the hike here). In the lead up to the trip, everyone was warning us about the terrible weather that awaited us in CT. “There’s snow on the sea” was the report I heard right before I left. I was so worried I packed my long underwear and rain coat. However none of our winter preparations were needed as CT smiled down upon us and offered up sunshine for the entirety of our stay. I think Cape Town loves me back.

Panorama of the waterfront

Our first day in Cape Town included a trip to the famous Robben Island prison (more about that here), which meant a boat ride out into Table Bay. I could understand all the warnings about weather because being trapped on that boat in rain would not have been fun, but lucky for us we had sun. Besides being a great trip being out on the water, we also had great photo ops. 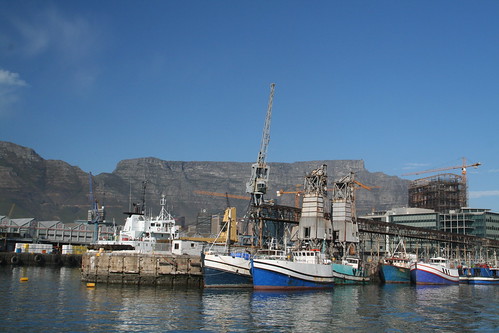 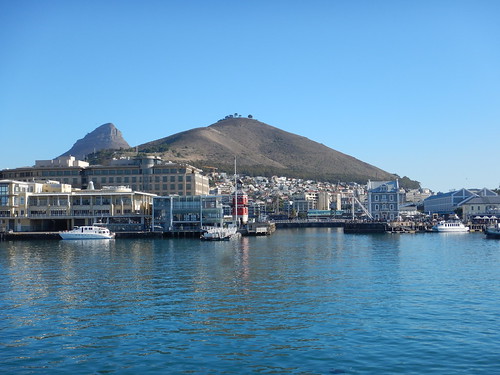 V&A Waterfront seen from the water 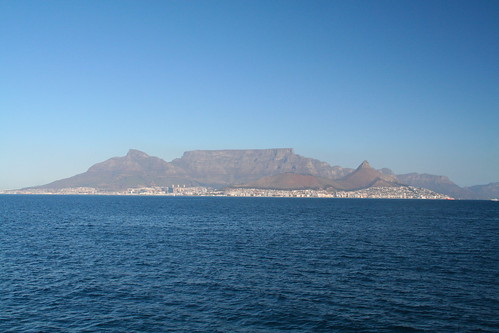 All of the Cape Town Mountains

Afterwards we wandered around the V&A waterfront, which is a great place to get food, shops for crafts, and have a sundowners, which we did. 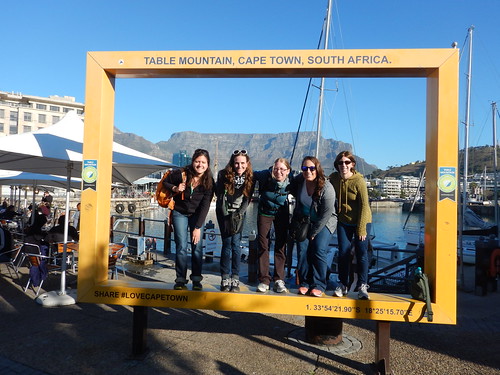 Our group photo at the V&A Waterfront 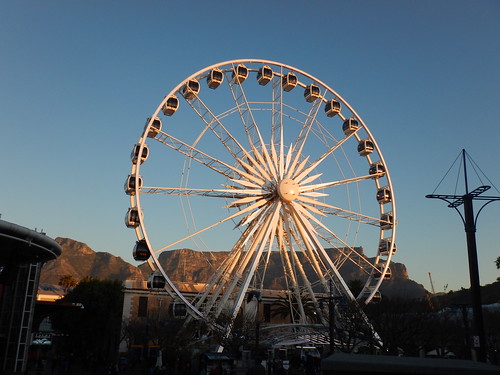 Sun beginning to set at the waterfront 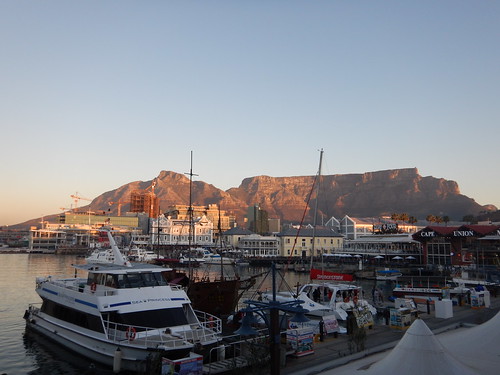 Sunset view from our sundowners spot 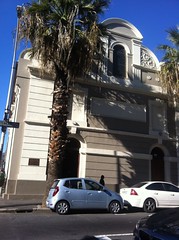 Entrance to the District 6 Museum

The next days included hiking up Table Mountain and another wine tour. On my last day in Cape Town I ventured out on my own as my group went to see the adorable Boulder’s Beach penguins, which I had already gone out to see (my post here). In lieu of that trip, I decided to visit the District 6 Museum, which is dedicated to remembering the life and times of the inhabitants of District 6 who were forcibly removed from their neighborhood in the 1970s by the apartheid government. The museum explains the history of this epic move and is home to numerous photos, artifacts, and interesting tidbits about what life was like in District 6 prior to the eviction of its residents. Interestingly, many of the tour guides and people that work in the museum are former residents of the area. The man taking money at the door told me that there was a picture of his parent’s 50th wedding anniversary photo on the second floor. In general, numerous photos line the building telling the tales of its people. 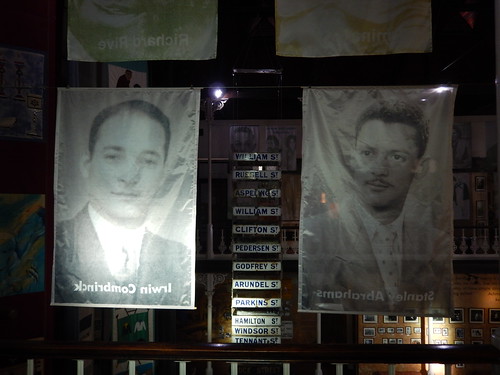 Faces of the District 6 relocations, inside the museum 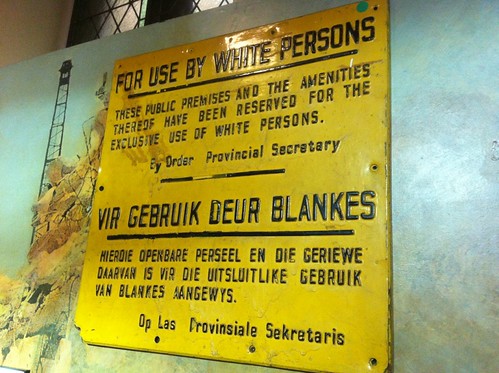 Signage from the District 6 relocations

The story is heartbreaking as many of the stories that came out of the apartheid era of this country are. That 60,000 people could be forced from their homes in just unimaginable to most of us. But that is exactly what happened. It started slowly and under the pretense that the buildings in the area were too derelict for people to live in, but it was more because they wanted to reclaim a central area of CT for white people. Thus, the blacks living in the area were told to move out and were packed up in trucks and forced out to townships on the outskirts of town. The homes there were no better than the ones they were kicked out from and now the homes were even farther from their jobs in the city. NOne of this mattered to the government and so the entire area was drained of its residents. There’s a map on the floor showing all of the original streets and shows how big and complex this neighborhood was. 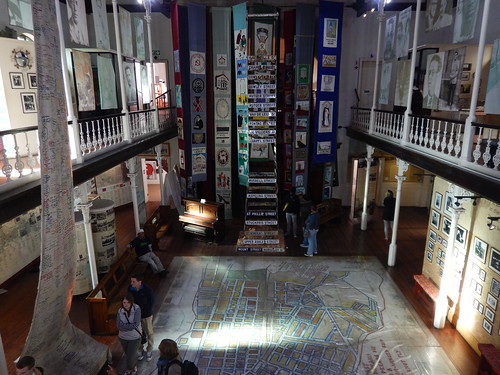 The saddest part was that the government never used the land and it still sits there today. That those people got kicked out and then the land remained empty must have been a big kick in the gut. However, in an interesting turn of fate because the land was never developed now the residents of District 6 can reclaim what was theirs if they can prove they resided there before the forced relocations.

After the museum, I wandered the streets of Cape Town. The city is just so compact and lovely. It was an incredibly sunny afternoon so it made being outside very enjoyable. During my walk, I explored a new neighborhood, The Fringe, I had fancy coffee at Truth Coffee, and I even bought some souvenirs at the busy Green Market Square outdoor shopping area. 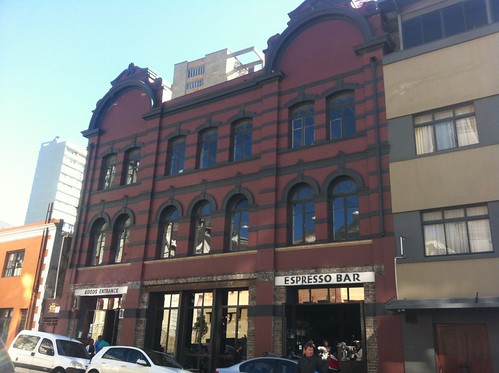 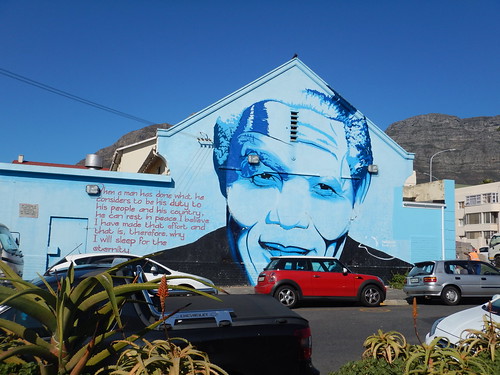 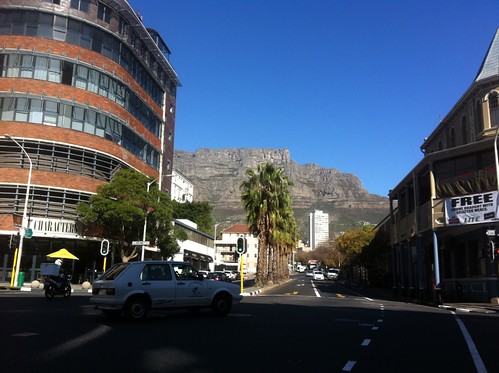 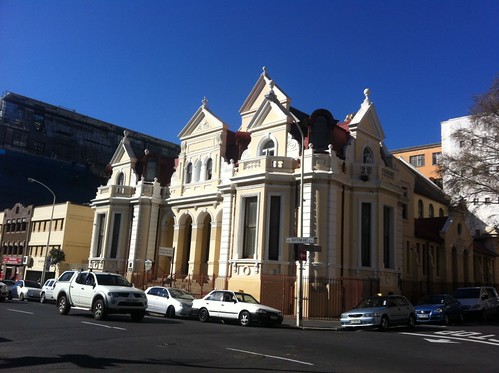 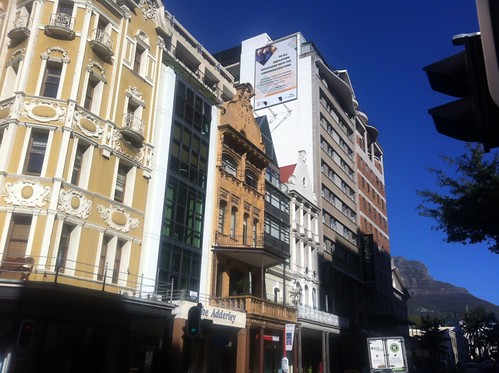 Buildings in the CBD of Cape Town 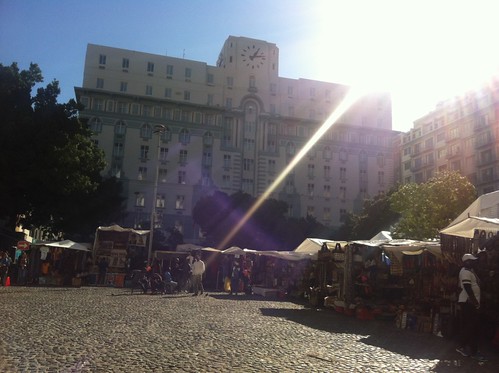 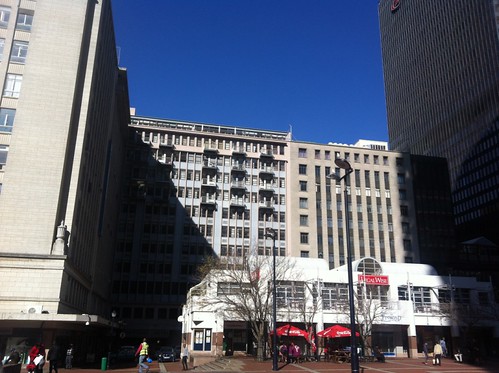 For all pictures of Cape Town, go here.