One tour I kept hearing about from fellow expats was the tour of the Hillbrow neighborhood of Johannesburg. Hillbrow is a neighborhood in Jozi mostly avoided by expats (and especially by tourists) known for high population density, the Ponte City Tower, and crime. I had driven through in an Uber a few times and had peered at the area en route to other more famous tourist attractions like Constitution Hill, but had never stepped foot in the area. After months of living in Gauteng, I decided it was high time to stop coming with reasons not to go and just visit it. 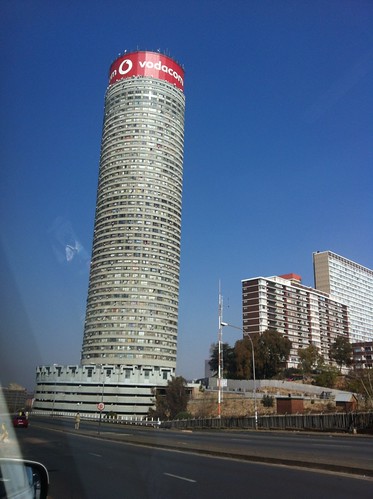 Checking out Hillbrow from the Uber 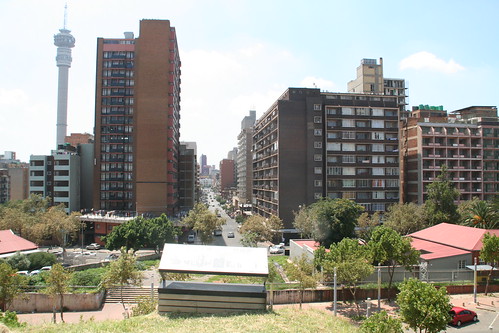 Looking towards Hillbrow from Constitution Hill 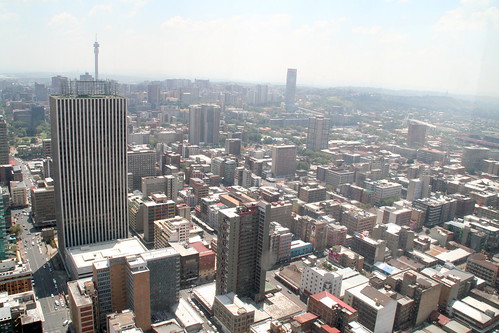 Looking towards Hillbrow from the Top of Africa

Luckily, tours are operated every Saturday in the neighborhood by Dlala Nje, a non-profit with the goal to be a hangout space for kids located in the bottom of the Ponte City Tower. 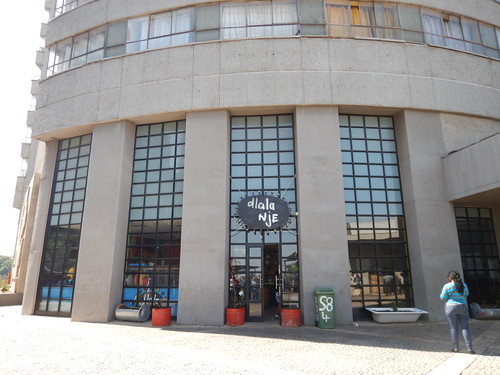 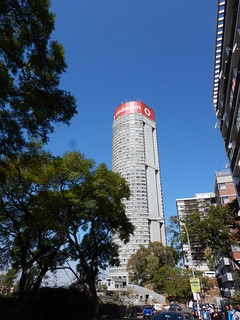 As part of the tour you get inside access to the tower as the tour leader lets you visit his apartment located on the 52nd floor where the guide gives you quite a history lesson on the area, Joburg, and South Africa. Getting inside access in to this famous and formerly infamous landmark is huge and was a main reason I wanted to go on the tour. I had also read an extremely interesting Slate article (Read it here) on this famous building dubbed “South Africa’s Tower of Dreams”, so I was even more piqued by this place. Thus, on a sunny Saturday I headed into the CBD to learn more about the changing demographics of Jozi and to understand life here pre- and post-apartheid.

Essentially, the Ponte Tower aka Ponte City Apartments was built in 1975 during the height of apartheid segregation. At that time, Hillbrow was a very popular area for expats having international restaurants, a hopping nightlife, and relative safety. Yep, it was an area only for white people with blacks needing both permission and identification to be in the area after dark. The apartments were sought after and it was one of ‘the‘ places to reside in Joburg. Some apartments even had upgrades like saunas or were multi-story. Another special feature of the building was its unique design, being shaped like a donut with a hole in the middle. The purpose was too allow light into the apartments from both sides, but it was quite a special design feature. 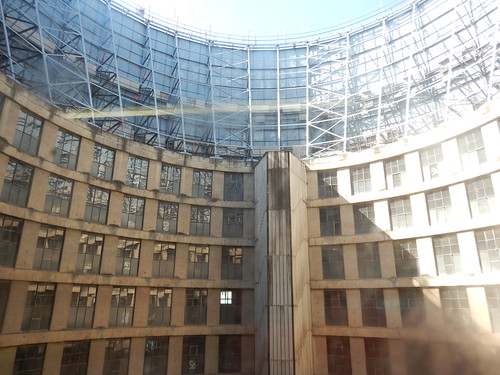 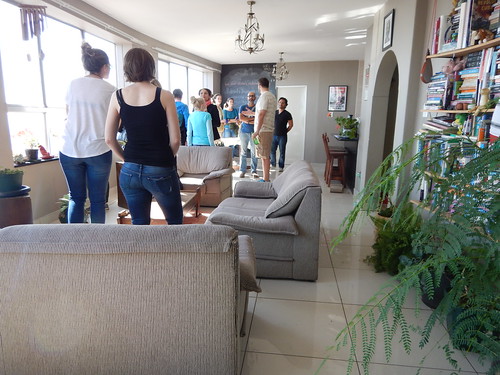 Inside a Ponte City flat 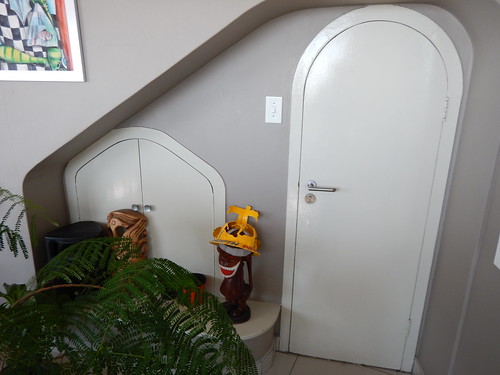 Getting a chance to get inside the tower was an awesome and elaborate experience. By getting inside the building, we got a feel for how an apartment was laid out and how it felt to live there. Also, taking the tour provided a chance to actually get inside this famous landmark since it has security up the ying yang. To get inside, you have to be escorted by a current resident, sign in a log book, and go through a security gate. You can’t just pop by to visit a friend living in the Ponte Tower. Besides that, if you have an overnight guest you have to pay 50 rand for them. Our guide mentioned that there is no walk of shame quite like giving your overnight guest 50 rand to get out of the building after having spent the night in Ponte Tower with you. 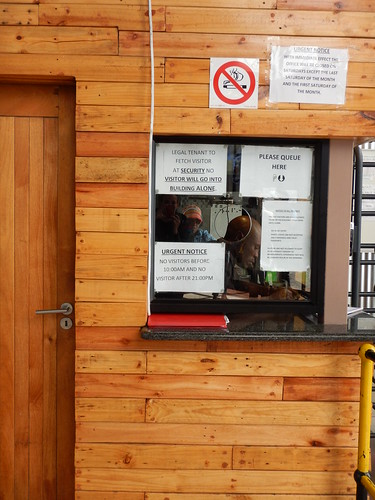 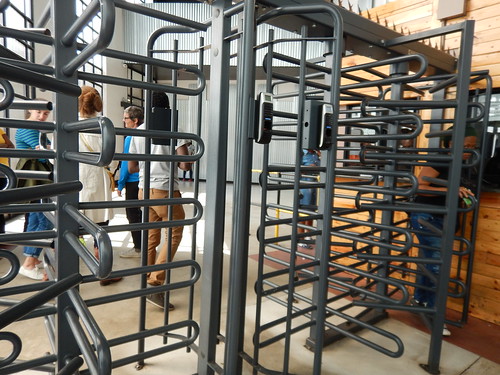 Intense security is a staple of life in Ponte City

Once inside the building, the apartment we visited was on the 52nd floor that had incredible views even overlooking the Telkom Tower. 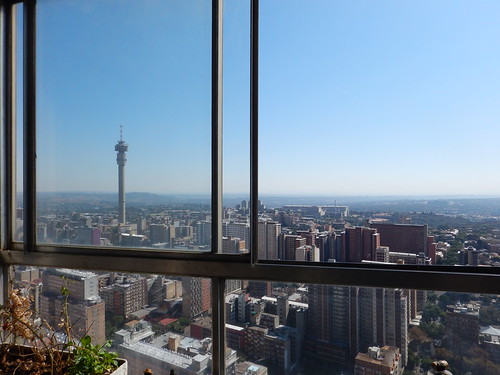 View from the flat we toured 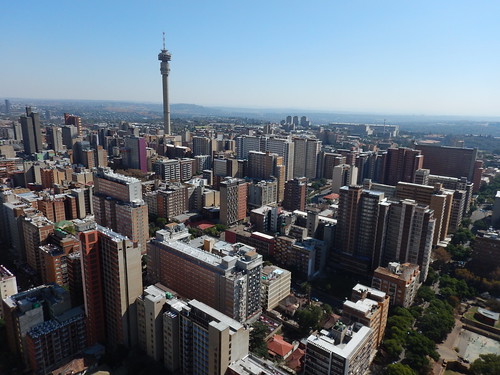 Ponte Tower spent its apartheid years as a sought after place to live. However, as with most things South African, apartheid fell and things changed. For Ponte Tower, once apartheid came to an end the whites left the area and soon the neighborhood fell into poverty. Whites suddenly didn’t want to live in the city centre and now the building needed tenants. From the late 1990s to early 2000s, the landlords filled the building to beyond capacity with people paying a fraction of the previous rents. With all the people crowded into the building, it became vertical urban slum. There was no electricity so getting to the 52nd floor required an excellent level of fitness. Crime ran rampant and it was said that within 10 minutes of entering Ponte Tower you could get a gun, some drugs, and a blow job. Trash pickup definitely wasn’t happening and at its worst the trash was piled up 13 stories high in the donut hole in the middle of the building. The unique feature of the building had become a defining feature of the building. The donut hole was a trash heap. Ponte Tower was no longer a safe, clean place to live. 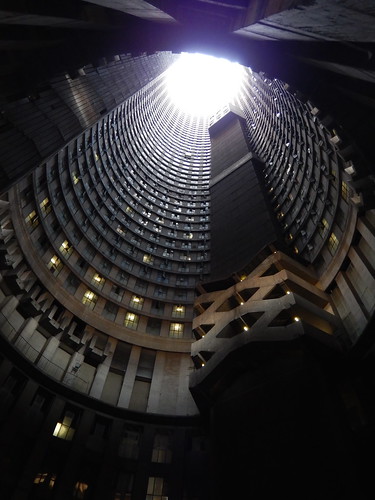 Standing in the bottom of the donut hole in Ponte City 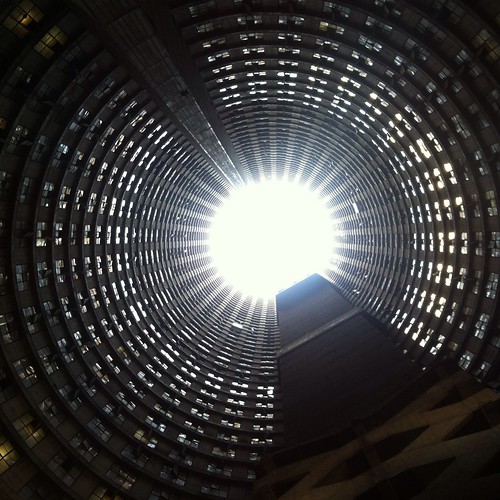 Looking up the donut hole

At one point because the building was in such a state, the discussion turned to making the building into a prison. This deal fell through and by 2007-2008 a revitalization campaign came to central Jozi attempting to lure young urban people back to the city centre. The building was “purchased” by some developers and a huge drive came about to remodel the building. The trash was moved out and replaced with building supplies. However, the economy crashed when recession went round the world and soon Ponte Tower was a ghost town once again. Still immigrants came off buses from Zimbabwe, Mozambique, and beyond looking for jobs in SA and needing places to live. Soon Ponte Tower became their home and remains a united nations of Africa to this day. Ponte Tower is now a safer place to live and soon gentrification may take over as young people move into the building for its nostalgia, views, and central location. However, until safety is guaranteed, Hillbrow will remain an area few tourists ever see and the Ponte Tower will just be a building in the photos taken of the Joburg city skyline. For me, the building is so much more and going inside should be a mandatory Jozi experience. 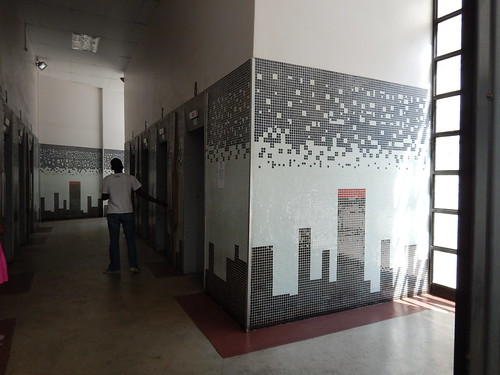 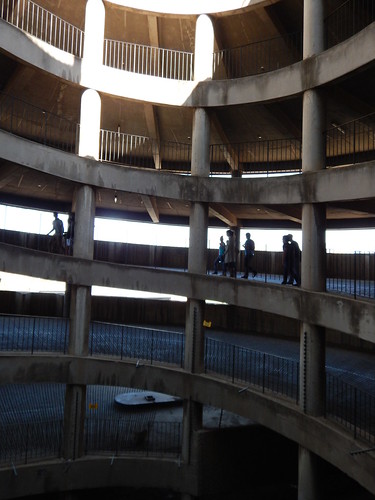 The tour walking by the parking garage 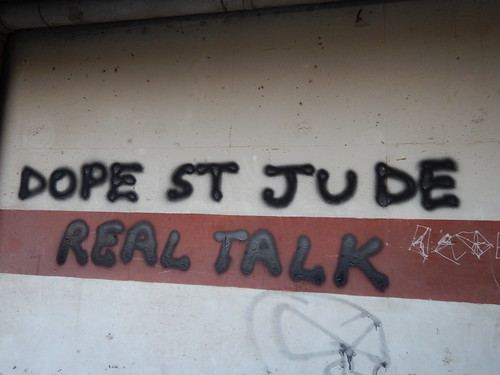 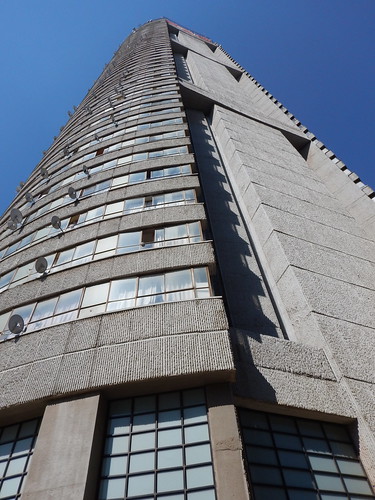 View of Ponte City from below

I’ve talked a lot about Ponte Tower because it was so intriguing to me, but the tour is more than just visiting Ponte City. It also provides a guided walk through the streets of Hillbrow, Berea, and Yeoville where you learn about the neighborhoods and interact with the people. At one point a woman came up to us and asked what we were doing there because a group of white people walking the streets of Hillbrow is not a common scene. We told her we were touring the neighborhood and she immediately smiled and welcomed us. Hillbrow truly is not the scary, barren wasteland I envisioned, but instead a thriving community. So what else did I see when on tour?

I saw the message board wall where people post for roommates located near to where the buses congregate. This wall is how so many immigrants end up living in Ponte City. The papers are actually stuck to the wall with gum. 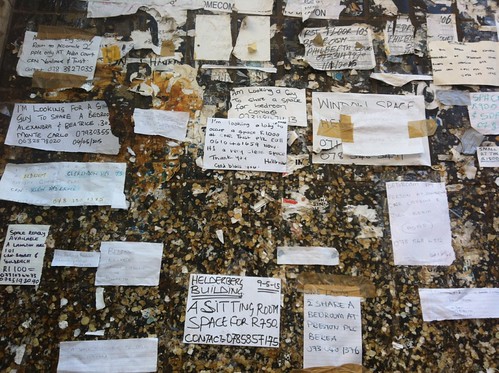 The original gumtree message board

I walked under the Telkom tower. Another city skyline landmark dotting all my photos. 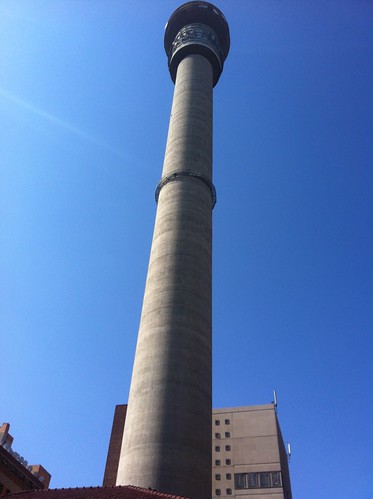 Beneath the famous Telkom Tower

I saw a local park, which demonstrated why a place like Dlala Nje, that provides a safe place for kids to play, is so necessary. 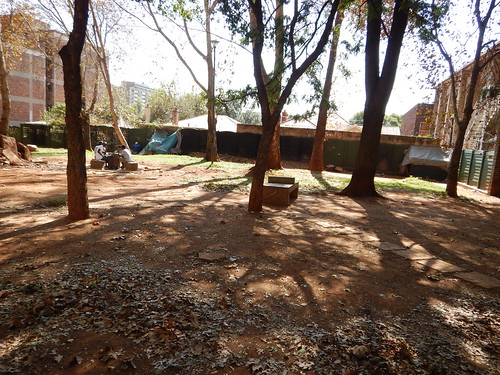 Gambling, drugs, and housing in a tent were present in this park

In so many ways, it was just a great way to learn about the bad, the good, and the changes that are occurring in this part of Jozi. Besides, I got to experience an area of Jozi outside the guidebook recommendations of things to do. 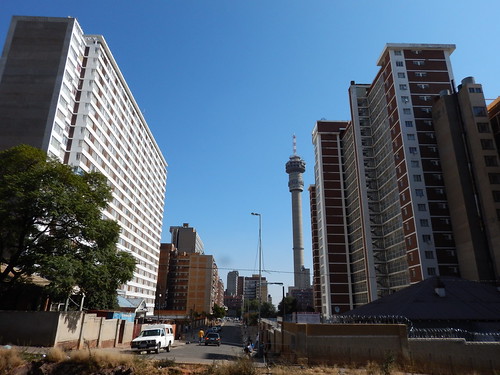 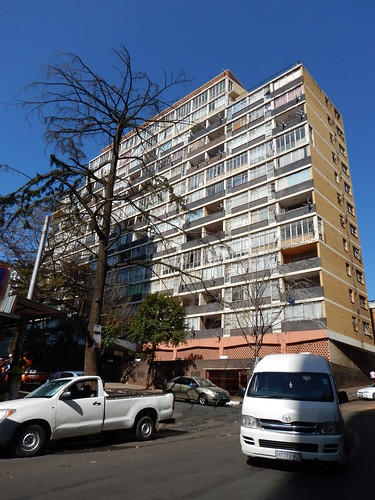 Building of flats, a taxi, and a bakkie. This is Hillbrow! 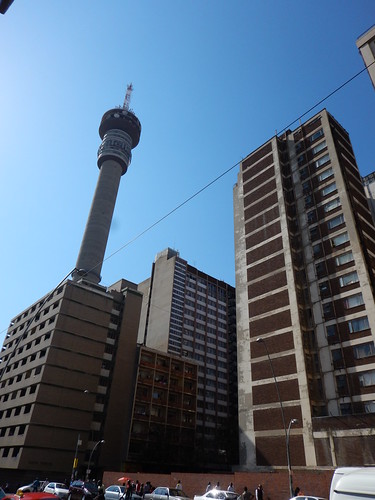 Telkom Towering over the flats of Hillbrow 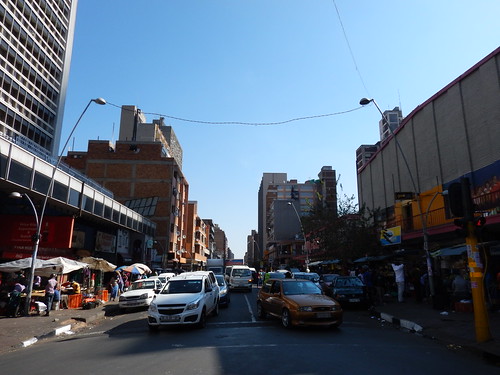 At the corner of Pretoria St and Catherine 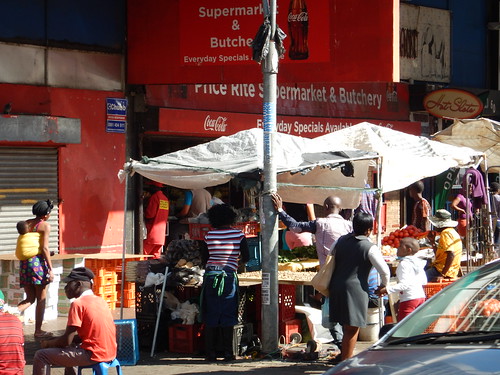 Market outside the market

Another fun part of the tour is that it ends with beers and tasty food at a shebeen, which is a local bar. The greens that I got in my vegetarian lunch were incredible! 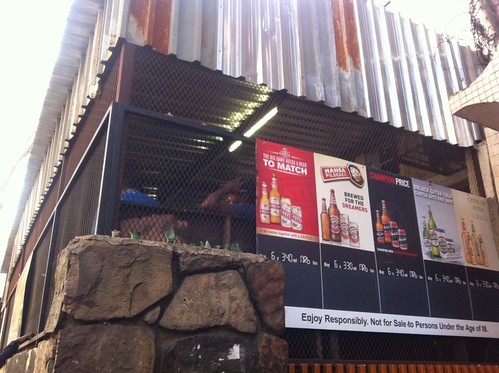 Drinking and eating in a shebeen

Overall, I found my day in Hillbrow to be an incredible experience and not at all like a typical inner city tour where you feel like you are exploiting poor people to feel better about yourself. Instead, our guide was respected and well-known in the community. He spoke to us about being culturally sensitive when taking photos and that we were not allowed to take photos of the hijacked building, which is a building that people began squatting in and calling home. The hijacked building had no electricity or roof and now doesn’t even have walls after being stripped of all its components. Guards are on-site 24 hours a day now to prevent people from squatting there again. By posting photos of the highjacked building, it was said to be exploitative and everyone in our group obeyed his rule. Cameras were down at that part of tour. Of course, I took many other photos, which can be found here.

If you want to experience this part of town then book a tour with Dlala Nje.